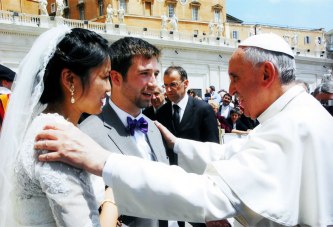 The Catholic blogosphere has been buzzing recently over some comments made by Pope Francis about marriage.  Specifically, he remarked that some sacramental marriages are “null” because the bride and groom come from a “culture of the provisional” and do not truly understand the nature of a permanent commitment.  Initial reports said that the pope’s original words were that “most” sacramental marriages were null, and then were modified from “most” to “some” or “a part of”.  Here’s the original Italian for those who would like to offer their own English translation: “E per questo una parte dei nostri matrimoni sacramentali sono nulli, perché loro [gli sposi] dicono: ‘Sì, per tutta la vita’, ma non sanno quello che dicono, perché hanno un’altra cultura.”  You can read the entire address here on the Vatican website.

The response from certain quarters has been overheated and dramatic.  One poor soul on FoxNews has even suggested that the Pope should now resign for these comments!  [You can read his assessment here.]  What is going on here?  Is the ecclesial sky really falling? 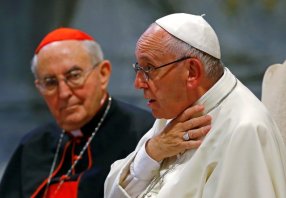 Pope Francis gestures as he speaks during the opening of the Diocese of Rome’s annual pastoral conference at the Basilica of St. John Lateran in Rome June 16. Looking on is Cardinal Agostino Vallini, papal vicar for Rome. (CNS photo/Tony Gentile, Reuters)

CONTEXT:  I have great respect for many of the canon lawyers who have weighed in on this.  They are, for the most part, highly upset for many reasons with the pope’s comments.  However, what troubles me in what I’ve been seeing in the blogosphere is a tendency to take the pope out of context; he himself is always cautioning people not to do that with his statements.  So, were these latest comments being made to a convention of canonists?  Were these comments from an address to the Roman Rota?  Were these comments from a lecture being given to canon law students? They were not.  Rather, this speech (actually, his words were a response to a question at the end of his speech, so they were not part of his prepared text) was made during the opening of the annual Ecclesial Convocation of the Diocese of Rome, held in the Cathedral for the Diocese of Rome, St. John Lateran.  The Pope is, of course, the Bishop of Rome, but he appoints a Cardinal to serve has his Vicar for running the day-to-day operations of the Diocese. At this time, that is Cardinal Agostino Vallini, who served as the host for the opening of this annual event for the Diocese.  So, I think the first thing for us to remember is that the pope is speaking here to a gathering of the priests, deacons and other pastoral ministers of his diocesan Church.

POINT OF VIEW:  Within this general context, then, I think we need to read the particular comments about marriage within the broader scope of the point he was making.  What the Pope was talking about is his recognition and concern with today’s “culture of the provisional” (Italian: E’ la cultura del provvisorio.)  In fact, his first example of this culture is not on marriage, but on the priesthood.  The pope recounts the story of a young man who expressed interest in serving as a priest, but only for a period of ten years!  His primary concern here is to express how an overarching culture of the provisional impacts every state of life today, including the priesthood, religious life and matrimony.  It is for this reason that he then makes his statement that many sacramental marriages today are null.

This is certainly not a new theme for Pope Francis.  Here are just a few random links to earlier comments which make the same point, but without the use of the term “null”: here, here, and here. 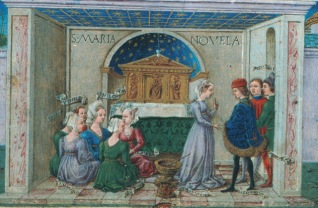 It seems pretty clear and straightforward that, whether the pope originally said “most” or “some” marriages is pastorally irrelevant to the point he’s trying to make: that because we are now living in such a culture of the provisional, everyone struggles with the ability to make lifelong commitments; on one level, they may think they understand the nature of permanence, but on another level, they may be incapable of making such a judgment.  The pope is not speaking here as the Legislator or as a judge in a marriage tribunal: he’s speaking from the perspective of an experienced pastor.

He’s actually saying what most ministers readily admit: that most people today have lost a sense of the permanent and that it is hard to find anyone who is willing or able to make a long-term commitment to anything or anyone.  One retired pastor, when I mentioned this kerfuffle to him, replied, “The Pope didn’t say anything that most bishops, priests and deacons who work with engaged couples don’t already acknowledge.” The pope was simply telling his diocesan pastoral ministers that they need to do what they can to help ALL of their people come to a greater sense of permanent commitment: to their faith in general, to their vocational aspirations, and so on.  In my opinion, to read his words and then to jump immediately to canonical judgments about those statements risks losing the BIG PICTURE of what the pope was saying.

The bottom line, it seems to me, is pretty straightforward: The first step in listening to the pope is to look at the overall message he is trying to make and to whom he is making it.  Generally speaking, with Pope Francis, he chooses to speak as who he is: a pastor.  He does not speak as an academic theologian, or as a canon lawyer, nor should he, in my opinion.  He is first, foremost and always, a Pastor: that’s his frame of reference, that’s his motivation, that’s his primary concern.  Theology, canon law, curial structures, and all the rest of the ad intra organs of the Catholic Church exist to SUPPORT that pastoral effort.  We all look at the world through the lenses we’ve been given in life: as teachers, as lawyers, doctors, farmers, business people, parents, and even deacons.  For some canon lawyers to be upset and concerned by the pope’s comments is only natural, but they should not be considered the first — or only — line in interpretation of papal statements.

I think, for those of us who serve as deacons, our take away from all of this might best be: how can I help the couples with whom I’m working come to a greater appreciation and understanding of the permanence of our beautiful sacrament of Matrimony?

5 comments on “Pope Francis and the Permanence of Marriage”