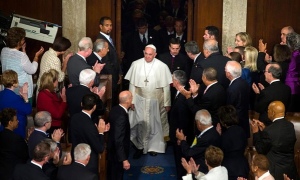 Just when you think things couldn’t get more exciting, Pope Francis takes things to a new level.  That’s the way it felt in Washington the day after the Canonization Mass at The Catholic University of America.  The pope, of course, was about to do something no other pope had ever done before: address a joint meeting of the United States Congress.  But before turning to that address in the next post, I want to offer some personal observations surrounding the event.

On a personal level, the pilgrims from the Diocese of Monterey were blessed by the great generosity of Congressman Sam Farr (D-CA, 20th District) and his staff.  Mr. Farr not only obtained tickets for a diocesan-sponsored pilgrimage group; he invited Monterey Bishop Richard Garcia to attend the pope’s speech in the Gallery of the Chamber itself.  Retired Monterey Bishop Sylvester Ryan was seated in a caucus chamber, and still another room was prepared for additional visitors from his District, and still others were outside watching on Jumbotrons.  So, pilgrims from the Diocese were found everywhere that historic day.  Once more, a very public “thank you” to Congressman Farr and his entire staff!

My own responsibilities that day included a very special mission.  Some weeks ago at the Vatican, the Pope was shown the actual cross worn by Father Junipero Serra over his Franciscan habit.  He asked that it be made available during the Mass of Canonization, so Bishop Garcia personally carried the relic to Washington, where he provided it to the papal Master of Ceremonies.  The day after the Mass — which was the same day as the Pope’s speech to Congress — was the first time we could retrieve the relic for its return to the Carmel Mission where St. Junipero is buried.  Since the Bishop had to head into the Gallery, he asked me to pick up the cross.  So, after driving the bishops to Capitol Hill on Thursday morning, I returned to the Basilica and met with Msgr. Rossi, the Rector.  The cross had been safely preserved in the sacristy where the Pope had vested for the Canonization Mass, and I carefully returned it to its box for the Bishop to transport it back to California.  Mission accomplished, I returned to Capitol Hill and was able to see the last half of the Pope’s remarkable address [see the next post].

Following the papal address, Congressman Farr and his staff laid on a light lunch for all of us, and then he gave a few of us a brief tour of the House, including the part of Statuary Hall containing the statue of St. Junipero Serra; the only other State represented by a saint is Hawai’i, with its statue of St. Damien of Molokai.  In an interesting bit of trivia, the masking tape was still on the floor in front of the statue of St. Junipero showing where the Pope and the Congressional leadership had stood only moments before.  The Congressman, as indeed all of us, had been moved by the positive tone of the pope’s address.  He remarked that it was exactly the kind of message our lawmakers needed to challenge them out of the overarching negativity and polarization that seems to have frozen them into indecision and inaction.

It was on this wonderful, positive, and very personal note that we left the Hill.  Some of us departed Washington shortly thereafter, some of us returning to California, while some of the bishops headed off to New York and/or Philadelphia.

Let’s now take a closer look at the remarkable address Pope Francis delivered to the Congress.