It begins this Sunday, 5 October 2014: the Extraordinary Synod on the Family in the Context of Evangelization.  The media, religious and secular, have been all over it.  The topic itself is so broad that almost everyone can find issues affecting themselves or other members of their families, leading to the questions, “How will the assembled bishops respond?  How will this affect me and my family?”

Much has been made of the very public debate going on between Cardinal Walter Kasper on the one hand and other Cardinals such as Raymond Burke and Gerhard Muller on the other.  “We can’t change church teaching!”, some cry,

“Mercy, mercy!” cry others.  “There will be no change to the teachings of the Church, because they are the teachings of Christ Himself,” report some; “we must find new ways of responding to the crises that face today’s families,” respond others.  And, at least according to some observers, all of this public debate by such high ranking prelates is simply unseemly, with fingers being pointed at the other side, saying, “Well, he started it!”

What shall we make of all this?  As the members of the Extraordinary Synod gather in preparation of the opening Mass of the Synod on Sunday, perhaps we can place all of this in some historical and ecclesiological context, using the Second Vatican Council as a guide. 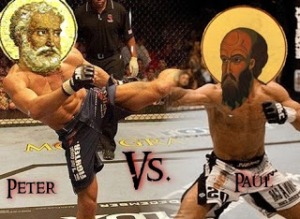 1) Kasper vs. Burke: “Cardinals shouldn’t fight in public; it’s just wrong!”  Well, prior to — and during — Vatican II, cardinals and other bishops often engaged in public debates, wrote letters, published opinion pieces and so on.  It was all part of the process, and this is no different.  Ever since St. Paul and St. Peter got into it over the question of who could become Christian, bishops have disagreed, sometimes publicly and loudly, to anyone who would listen.  Consider it part of the necessary public discourse for such important issues.  But I also invite people to avoid polarization!  When two people argue, one could be right and the other wrong, both could be right, or both could be wrong!  These issues, like life itself, are complex and demand rigorous, comprehensive argument, but no one is helped by a “white hat, black hat” mentality.

2) Even the fault lines of the arguments are similar to those surrounding the Council.  The Pope had called for an ecclesial aggiornamento (updating), and the response from some bishops was that you could NOT update the Church without weakening church teaching, giving the impression that what had gone before was wrong and now being corrected, or that God’s truth was somehow being compromised.  Other bishops responded that doctrine develops (certainly picking up cues from Cardinal Newman’s work in the 19th Century), and that the pastoral needs of the 20th Century demanded new and more pastorally effective approaches.  None of this was new THEN, nor is it new NOW.  This is what led St. John XXIII to teach, in his opening address to the Council: 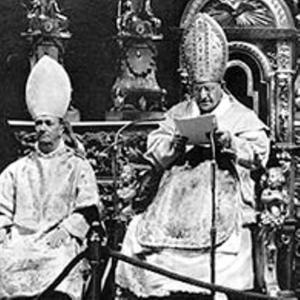 The substance of the ancient doctrine of the deposit of faith is one thing, and the way in which it is presented is another. And it is the latter that must be taken into great consideration with patience if necessary, everything being measured in the forms and proportions of a magisterium which is predominantly pastoral in character.

This seems to me to be precisely what Pope Francis is asking for, and what Cardinal Kasper is attempting to do: he is not questioning “the ancient doctrine of the deposit of faith,” but rather “the way in which it is presented.”  Furthermore, the framework for both content and method must be “predominantly pastoral” in character.  The pope included all of this in his opening address precisely because there had been such vehement debate on these points during the antepreparatory and preparatory phases leading up to the Council itself.  Fifty-two years ago this month, St. John was concerned that the bishops of the world be clear on what he was asking for, and what he perceived the Church and the world needed most.

3) Keep the relationship of theology and law in proper perspective.  This is very important, especially in the current debates.  Theology precedes law; law is not a source for theology.  Law develops out of the theology which comes first.  It is because we believe certain things about God and ourselves that we then develop laws which reflect those prior realities.  Looked at another way, we don’t start with the law and then develop a theology — or at least we shouldn’t!  Why do I bring this up?  Because in some of the recent breathless exchanges on the issues surrounding the Synod, there have been appeals to what the law has to say, while the “other side” has been speaking theologically.  Yes, theology and law intersect, certainly!  But the law serves theology, not the other way around.  Consider a debate between a medical doctor and a lawyer over the nature of a particular disease.  The doctor is going to look at the disease from within her own framework of science: causes, methods of transmission, treatments.  The lawyer is going to look at the same disease from with his own framework of the law: actions, responsibilities, jurisprudential history.  Same disease, different ways of addressing it.

During Vatican II, especially during the often fiery first session, the Prefect of the Holy Office (now known as the Congregation for the Doctrine of the Faith) was not a theologian at all.  The Prefect was a respected canon lawyer, Cardinal Alfredo Ottaviani.  Think about that: a canonist responsible for guarding the church’s doctrinal office.  This led to some fiery exchanges during the First Session of the Council, as many of the world’s bishops took to the microphone to complain publicly about the way Cardinal Ottaviani and his curial staff was dealing with theologians around the world.  It led the aged Cardinal to respond passionately in defense; he refused to stand down at the end of his allotted time and eventually one of the Cardinal-Moderators simply unplugged his microphone.  Cardinal Ottaviani left the Council and did not return for a couple of weeks in protest.

But consider this.  As I wrote above, we need to avoid a “white hat, black hat” approach to these arguments.  During Vatican II’s debate on war and peace in 1964 and 1965, there was no stronger opponent of ALL warfare than Cardinal Ottaviani.  To read his interventions on the subject, you could easily hear the voice of any number of folks “on the left” who were arguing to outlaw all war.  On this issue at least, the canonical lion was more “liberal” than almost everyone in the “progressive” group of bishops.  Just like everyone else, bishops are complex human beings who defy easy characterization.

As I also said above, public debates between bishops is no new thing.  But it is also important, when assessing an argument, to discern the frame of reference being used by the respective participants.  Theologians such as Cardinal Kasper are speaking and evaluating things theologically; canonists such as Cardinal Burke are doing the same, but canonically.

This all goes back to St. John XXIII’s point, to paraphrase: Certain points of theology cannot change, perhaps; but the way they get enshrined in practice and in law can and sometimes must change.

4) Since we’re looking at the Council, what did those bishops have to say about the current question?  You can rest assured that whatever documentation emerges from the Synod, there will be multiple references to the Pastoral Constitution on the Church in the Modern World (Gaudium et spes), especially paragraphs 47 to 52, which focus on the nobility of the family. Read the whole document here.  Many of the challenges identified in the preparatory work for the Synod were already realities identified by those bishops five decades ago: these are not new challenges.  In many ways, the work of these two synods (this year’s and next’s) can be understood as an extension or a continuation of the Council’s work.

5) Keep your expectations reasonable, and follow closely; this is going to be fun!  On the one hand we should not expect too much from this year’s Extraordinary Synod.  Its purpose is to prepare for NEXT year’s ORDINARY Synod.  The debates this year will help refine the questions and procedures to be dealt with more formally next year.  Synods like this do not hold the magisterial weight of a General Council (such as Nicaea, Trent, Vatican I or Vatican II), but they will certainly lead to significant developments nonetheless.  I would expect that no papal document will result from this first, Extraordinary Synod.

Following the Ordinary Synod next year, however, there should be an Apostolic Exhortation from the Holy Father.  I would also hope that, following this Extraordinary Synod, there might be another opportunity for listening sessions around the world in which experiences and opinions are sought from a wide variety of people.  And, hopefully, sufficient time will be given for the process, unlike last year in which tight deadlines prevented many people from responding to the questionnaire set out from the Synod office.  Again, our model can be Vatican II.  In between the Council’s sessions, bishops went home and consulted with many of their own experts on matters they would be discussing in the following session.  It was a graced time of mutual exchange and shared learning and consultation.

May this synodal process over the next year or so be fruitful and benefit the common good of all!

7 comments on “The Extraordinary Synod and Battling Cardinals: Perspectives from Vatican II”