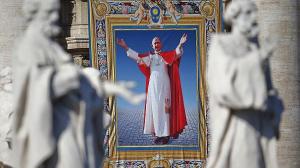 Today we experienced the ringing down of the curtain on Act I of the synodal process on the Family.  Pope Francis closed the Extraordinary Synod today with Mass in St. Peter’s Square and the beatification of Blessed Paul VI.

But the process has only just begun!  Perhaps the best road map to the future is found in the Pope’s speech on

Saturday closing the final work session of the Extraordinary Synod.  In fact, I believe that this beautiful speech deserves to be read in its entirety; you may find it in English translation here, and if you read Italian you can read it as the Pope delivered it, here.  It is spiritually rich, and it also gives us wonderful insights into the Holy Father’s dreams for the next steps in the process.

Act II, which has now begun, takes place over the next twelve months.  Act III will be Ordinary Synod on the Family to be held in October 2015.  Here’s how the Pope explained it in his speech:

Dear brothers and sisters, now we still have one year to mature, with true spiritual discernment, the proposed ideas and to find concrete solutions to so many difficulties and innumerable challenges that families must confront; to give answers to the many discouragements that surround and suffocate families.

One year to work on the “Synodal Relatio” which is the faithful and clear summary of everything that has been said and discussed in this hall and in the small groups. It is presented to the Episcopal Conferences as “lineamenta” [guidelines]. 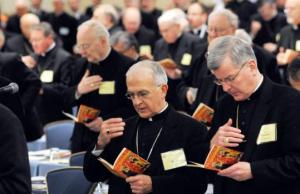 Using the Synod’s Relatio, the various bishops’ conferences around the world will be discussing its contents and mapping out their specific courses of action for their dioceses.  For example, here in the United States, the United States Conference of Catholic Bishops (USCCB) will have it on their agenda next month at the Fall Meeting in Baltimore.  We can expect that individual diocesan bishops will then develop ways and means of encouraging further conversations within their own dioceses over the coming year.  Keep in mind, as the Pope says above, that the current Relatio is merely a starting point, a kind of rough draft, for the work that lies ahead.

Then, next October, Act III will begin as the Pope opens an Ordinary Synod (not an Extraordinary one such as just ended) on the Family.  At that time, more discussions will be held by the Synod Fathers, many of whom will be different bishops than the ones who attended this one, and a final document will be prepared for the Holy Father.  It can then be anticipated that the Pope will take all of these results and draft his own Apostolic Exhortation in which he charts the course ahead.

I think there are several important things to keep in mind.

1) To speak of the current Relatio as anything other than a working document is a mistake.  It does not constitute in any way “official teaching.”  Rather, it simply recounts, as the Pope says, the various elements which were discussed during this first stage of the process.  So, for people to be upset over what the document currently says, or doesn’t say, is very inappropriate and unnecessary.  The various topics for FUTURE work are all there; what final forms may come in the year remain to be seen.

2) This is why the Pope directed that even those three paragraphs which did not gain a 2/3 majority vote would still be printed in the text.  He also directed that the voting results be included so that everyone (and not just bishops!) could see how the voting went.

3) I would strongly recommend that people spend more time on the Pope’s speech at this point, because it gives the clearest indication of how HE is seeing things.  Consider just two tantalizing tidbits.

I find it interesting that he takes the time here to use the very verb so many were fussing about earlier in the week: and then he plainly says that even as “welcoming” it doesn’t go far enough!  We’re not merely to welcome those who come to us who are lost: we are to go out and find them.

And this is the Church, the vineyard of the Lord, the fertile Mother and the caring Teacher, who is not afraid to roll up her sleeves to pour oil and wine on people’s wound; who doesn’t see humanity as a house of glass to judge or categorize people. This is the Church, One, Holy, Catholic, Apostolic and composed of sinners, needful of God’s mercy. This is the Church, the true bride of Christ, who seeks to be faithful to her spouse and to her doctrine. It is the Church that is not afraid to eat and drink with prostitutes and publicans. The Church that has the doors wide open to receive the needy, the penitent, and not only the just or those who believe they are perfect! The Church that is not ashamed of the fallen brother and pretends not to see him, but on the contrary feels involved and almost obliged to lift him up and to encourage him to take up the journey again and accompany him toward a definitive encounter with her Spouse, in the heavenly Jerusalem.

So, however Act II and Act III develop over the next year, the vision of our Holy Father Francis is quite clear: the Church as “field hospital” for all in need is open to receive patients; in fact, we’re supposed to be out in the streets and the fields and the back alleys finding those in need.  Brother deacons, this message is particularly apt for us!  If the whole Church is a field hospital, we deacons should be the EMTs.

Stay tuned.  This is going to be quite a year ahead!  And, as the Pope requested, pray for him.  He has set us on a challenging course, but one that will, with God’s grace, bear much fruit.

6 comments on “The Synod on the Family: Curtain Up on Act II”