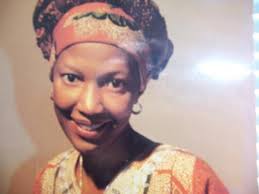 All of us have been touched and blessed by the life of Dr. Maya Angelou.  Her recent passing had all of us of a certain age reflecting on her life and impact on our own lives.  I re-read her wonderful poem “Phenomenal Woman” (read it here), and my mind wandered to the other phenomenal women I’ve known: ALL of the women in our family, for example, every one of them: my wife, mother, sisters, cousins, daughters!  And then, listening to the rhythms of Dr. Angelou reading some of her own poetry, I was reminded of still another phenomenal woman of color: the dynamic, brilliant, multi-talented, and courageous Sister Thea Bowman, who died of cancer at age 52 in 1990.  Born and raised in Mississippi, Thea was a religious sister, singer, actress, teacher, liturgist, dramatist, Ph.D. with a particular expertise on fellow Mississippian William Faulkner, and above all, a passionate evangelist.

I remember first hearing of Sister Thea many years ago, shortly after leaving the seminary.  Many of us seminarians had been helping out in African-American communities as we could during the civil rights movement, and soon word began to spread about this fiery young sister who was appearing on the scene.  Although she had earned her Ph.D. in English at the Catholic University of America, and became known as an expert on Faulkner, she was never a stereotypical academic!  Her principal mission was to enable, empower, awaken and inspire people, and her influence both within and outside of the African-American community is incalculable.

Over the last few days, I’ve mentioned her name to several people and to my amazement they had never heard of Thea.  This must not be allowed to happen!  I’m going to put up two videos here.  First is a biography of Sister Thea produced. shortly after her death.  As you can see, she continued to inspire even after the cancer that was killing her had confined her to a wheelchair.

The second video is truly remarkable.  The quality of the recording is not very good, so let me explain what you will see.  The US Bishops meet in general assembly twice a year.  This video is from one of those meetings, in 1989.  The bishops, as you will hear from the late Bishop John Ricard, had formed a Committee to support Black Catholics, and Sr. Thea was one of the consultants to that committee.  Terminally ill, she was invited to address the bishops, and — well, you will see what happens.  Keep that in mind: from her wheelchair, a dying Thea brings the bishops to their feet.

How many other Theas and Mayas are out there, still finding their voices?

UPDATE: I was just informed that Brother Mickey McGrath has recently published his own work on Sister Thea.  Here’s a link to Amazon.com in case you’re interested.  I haven’t had a chance to enjoy it yet, but can’t wait to do so!