There is a reason why this post is about twelve hours later than I intended it to be.  It took that long for me to get out of the neighborhood of the canonizations!  All the roads in and out of the area were closed down, so no taxis were available, and the buses, though advertised as running, where nowhere in evidence during the hour and a half I waited!  But don’t get me wrong — I wouldn’t have missed any of this for the world.

Let me tell you about the day itself as some of us experienced it.  I haven’t seen any of the TV coverage yet, but here’s what some of us saw and experienced.

2:45 AM: Got up to get ready for the trip to Saint John Lateran, where we are to meet the buses.

3:45: At St. John Lateran, and I’m the only person here!  Did I misinterpret the instructions we’d been given?  Am I in the right place at the right time?  I decide to wait until 4:00 before getting too concerned.  I sit on the steps of the Basilica and wait.

4:00 AM: Cars start dropping people off and soon there are dozens of people milling about.  The first two buses arrive; there will be eight altogether. But here’s the funny bit: If you’ve ever been to Rome, you’ve seen the “Roma Cristiana” double decker buses going everywhere.  Well, those are the buses that have been chartered for us this morning!  We all feel like we’re going on a tour!

4:15 AM: The Navy officer in me has to admit that the Romans have organized this well, with great precision and attention to detail.  There’s a monsignor here who could pass for Patton in his ability to get the right people on the right buses!  I’m on bus number two, along with a group of Polish priests and part of the Vatican choir.  Interesting groups!

5:00 AM: Right on the dot and right on schedule, we leave.  Best trip I’ve ever taken to get around Rome.  Carabinieri on motorcycles lead the way and act as traffic controllers as our eight buses make a quick trip over to the Vatican.  I’m on the upper deck, so the view is really cool. 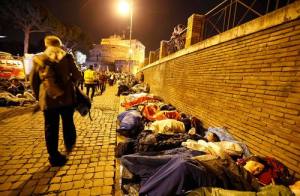 5:30 AM: We arrive at the Vatican, next to what used to be known as the Holy Office (“Sant’Uffizio”).  How to describe the scene.  Bedlam?  Chaos?  As we were approaching, the crowds exploded in numbers.  There were groups already walking toward the Vatican, with their leaders holding up the guide flags as if they were strolling around at

lunchtime!  All over, there were groups starting to wake up after camping on the streets on pads, cardboard and blankets.  People were crowding along the bridge approaches, and the underpass was packed.  When we arrived, we were rushed off the bus and told to wait in a group nearby for further instructions. 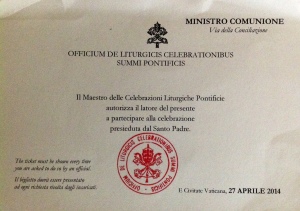 5:45 AM: We were now given NEW credentials to participate; these were from the Vatican itself (the previous credentials were from the Vicariate).  We were then escorted “a piedi” (by foot) around St. Peter’s and the Via della Conciliazione.  And then I saw a remarkable sight: As we approached the Ancora Bookstore (on the right) and the Vatican Press Office (on the left), we saw security people at barricades.  Beyond them, stretching across the entire street and extending down all the way to the Tiber, was a sea of people.  I wish I’d had a camera to record the images.   Rather eearily, they were relatively quiet, standing there.  In the darkness, it was more than a little surreal!  Down the center was a narrow walkway kept open  by metal barricades, and we were escorted down this path.  It was also being used by the emergency services people to help people who had collapsed or were in need of assistance.  Some groups sang softly.  We quickly made our way to Santa Maria in Traspontina, but then there was a snag.  There was no way to get from the center of the street into the church!  After about a half hour of phone calls, working the walkie-talkies, lots of gestures and shouting, a pathway was negotiated and we got into the church before the throng filled up again. 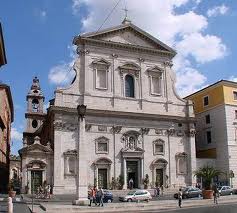 6:00 AM:  In the quiet, darkened church we found places to sit and get comfortable.  The photo to the left was obviously taken during daylight and without the crowds in front of it!  All of us priests and deacons had little bags with us carrying our albs and stoles, so we settled in quietly and prayed for the safety of those outside.   We were welcomed by the pastor of the church and invited to make ourselves comfortable.

7:30 AM: We began Morning Prayer together, led by the pastor and a (transitional) deacon; more about him later.

8:00 AM: We began the celebration of Mass in the church.  Long tables were arranged behind the altar itself, and there were literally dozens of ciboria filled with hosts arranged there.  During our Mass, all of these were consecrated and would be the Hosts we would distribute later to the people outside gathered for the Mass of Canonization.  It was a beautifully simple Mass.  No musicians except for one of the deacons who served as cantor to get us going.  We sang a cappella and kept thinking and praying for the pilgrims outside.  It was like we were in a bubble of prayer.

Oh, and here’s the deacon who assisted: ever wonder what happened to the actor who played Tony Almeida on the series “24”?  He’s here in Rome, a deacon at this church!  Seriously, if this isn’t Carlos Bernard, they could be twin brothers.

9:00 AM: After Mass a large screen was set up so we could follow the Mass of Canonization, which was to start at 10:00.  More than just for our entertainment, we were told that we would be timing our own movements based on the Mass.

10:00 AM: The Mass begins as the Pope enters.  Here we go.  Our schedule is like this.  After the pope’s homily is completed, we are invited to vest.  We quickly put on our albs and stoles and form two lines leading into the sanctuary.  We each take a ciborium and the line forms heading to the front doors of the church.  As soon as the Lord’s Prayer begins at St. Peter’s, they open the doors of Santa Maria, and out we go, two by two.  We move to the central path I mentioned before, and turn immediately to the left, AWAY from St. Peter’s and toward the Tiber.  Every ten meters or so, one of us “drops out” of line and stands in front of the crowd.  I’m toward the end of the line, so I wind up where I’d hoped to be all along — down near the Tiber.  I notice something I hadn’t before: the cross street where I am standing, getting ready to distribute Communion, is named after St. John XXIII.  Those who know of my love for St. John will realize just how special this location was!  I’ve marked my location on the map at right.  You can see St. Peter’s on the left, and I was standing as indicated by the yellow arrow on the right.

We all turned to watch the big screen TVs, and as soon as the Pope had finished his own Communion, we turned and began distributing communion ourselves.  How to describe the moment?  First we were up against barricades, surrounded and assisted by carabinieri, and people had to struggle to get to us as we reached as far as we could into the crowd.  We had been told to distribute Communion only on the tongue, and not into the hand.  The wisdom of this became quite apparent.  Some people were holding up their hands, and indicated how many hosts they wanted, like they were asking for seats in a restaurant!  But most were as reverent as if they were in church.  We offered Communion with the Latin words, “Corpus Christi”, since there were so many different cultures and languages present, it was the only way to communicate.  I didn’t stay just in one place; I tried to move to different positions so people could get forward more easily, and I noticed that all of us were doing that as well.  For all of the crowds, this was an amazingly intimate experience, sharing the Body and Blood of Christ with so many people who simply wanted to be part of this sacramental moment in time.

After about 10 or 15 minutes, I had no more hosts, and began making my way back to the Church; by the time communion was finished in St. Peter’s, we were finished as well.  As the Pope was reading the Prayer after Communion, all of us were back inside Santa Maria.  A crew from the Discovery Channel was present with us, and I was interviewed briefly after the Mass, and then — it was over!  The pope did a drive-by along the route, but even he had trouble navigating through the crowds!

The rest of the day, as I said at the beginning, was spent trying to navigate my way OUT of the area!  The rains held off during the ceremonies, thank God, but they began in the early afternoon, making walking around the area pretty cold, damp and miserable!  I even dozed for a while on the steps of the Vatican Press Office waiting for the rain to let up a bit.  Finally, about 8 PM, things were relatively normal, I found a taxi, and headed to the residence.

I can’t describe adequately how special this time has been.  Not only pertaining to the two new saints of ours, and all of the attention being paid about whether or not this should be done, or if one or the other of these two men should be declared a saint — whatever!  What has been the most amazing thing has been the people, from all over the world, here to celebrate their faith and their love.

So often, we think of “church” in terms of our own parishes.  True enough.  Sometimes, we think of “church” in terms of diocese or country — also, true enough.  We can get critical and say, “Why doesn’t the Church do _____?” (Fill in the blank with your own ideas here.)  But experiencing the Church like this, from Poles who can’t ever get enough of St. John Paul II, who restored their own national pride and sense of freedom and solidarity, to the people from Bergamo whose love for St. John XXIII was just as palpable, to the Americans, French, Chinese, Belgians, Sudanese, Sardinians, Romans, Spanish,  Germans, Netherlanders, Africans from every country on that continent, Koreans, Filipinos,  Australians, New Zealanders, and Brits, plus others I’ve forgotten: THIS is the face of the Catholic Church, and this is the kind of impact Pope Francis is having on the enthusiasm and the joy people brought with them to Rome.  Were there problems?  Oh, you bet!  Will people go home with bad experiences along with the good?  Undoubtedly.  But for the majority of people, those inconveniences and challenges were nothing compared to the overall joy of being here and being together. 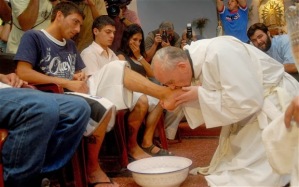 9 comments on “The Canonization Chronicles: Thoughts on the Day”