In a few hours I’ll be on a flight heading to Rome for the solemn canonizations of St. John XXIII and St. John Paul II on Sunday, 27 April.  It is no hyperbole to say that every journey to Rome is an adventure.  This one will be made even more so because of the great popularity of the two popes being declared saints. 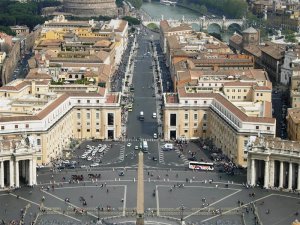 I’m on the list, along with dozens (hundreds?)  of other deacons and priests, to assist with the distribution of Holy Communion to the huge assembly which is already gathering in St. Peter’s Square and beyond.  I’ll have more details to report once I get there and pick up my credentials at the Vicariate of Rome near the Basilica of St. John in the Lateran.  To be honest, I have a great hope that I’ll be assigned to serve outside of the Square.  The Via della Conciliazione is always busy, with the shops, cafes, hotels, congregational headquarters and offices, the buses, cars and taxis, and the wall-to-wall people.  I can’t imagine what it’s going to look like on Sunday, but I hope that I’ll be distributing Communion out there in the middle of it.  My guess is that the Via will be full of folks who want to be at the Mass but won’t be able to get into the Square, or weren’t able to get tickets to sit or stand closer to the papal altar.  They will follow the Mass as best they can, and those of us serving will go and serve them right where they are.  Who knows, maybe we’ll be standing on the bank of the Tiber!

I’ve also been thinking about how quickly things can change.  A few years ago I was in Rome for meetings.  A good friend of mine from high school seminary asked me to find some kind of religious item with the image of Pope John XXIII: a medal, a rosary, a small statue.  For folks of our generation in the seminary, Pope John was a

particular favorite for us.  He was as influential on us as Pope John Paul would be to later generations of seminarians.
However, as I wandered around the shops near the Vatican, I was truly amazed to discover — nothing!  I found, of course, plenty of things with Pope John Paul II’s image, and Pope Benedict’s, even items with other popes, like Pope Paul VI and Pius XII.  But there seemed to be absolutely NOTHING remembering Pope John XXIII.  Finally, as I was about to give up, I wandered into a little shop and was waiting for the shop owner to finish a phone call so I could inquire.  While waiting, I glanced into a back room in the shop and found two small statuettes of Pope John!  They were covered in dust and had clearly not been on public display for years.  I think the owner was glad to finally be rid of them.

My guess is that on THIS trip, I’ll find plenty of items for both John as well as John Paul!  I’ll keep you posted!