Some folks in the blogosphere were upset recently when Cardinal Oscar Rodriguez Maradiaga, Archbishop of Tegucigalpa, Honduras, and 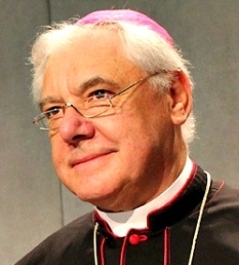 moderator of the Pope’s “Gang of Eight” board of cardinal-advisors, publicly took to task soon-to-be Cardinal Gerhard Mueller, Prefect of the Congregation for the Doctrine of the Faith (CDF).  In an interview with a German newspaper, Cardinal Rodriguez referred to recent comments by the Prefect which were directed to German bishops pushing for more openness to finding possible pastoral approaches for people who have divorced and remarried without annulments.  While the German bishops are open to finding ways to permit people in this situation to receive the Sacraments (especially Communion), the Prefect has essentially closed the door on such a possibility.  Cardinal Rodriguez responded, referring to Archbishop Mueller: “He’s a German – yes, I have to say it – and above all he’s a professor, a German theology professor. In his mentality there is only true or false. But I say: The world, my brother, the world is not like that. You should be a little flexible, if you hear other voices, so as not to only hear them and say, no, here is the wall.”  Rodriguez Maradiaga, of course, is a Salesian and was himself a professor, with earned doctorates in philosophy, theology and moral theology; he also holds graduate certificates in clinical psychology and psychotherapy.

It is, of course, most interesting when two public figures debate publicly!  However, a quick review of various media finds that many people were highly incensed by the Cardinal’s public criticism of the Prefect of the CDF, finding it unseemly in the extreme.  However, I would suggest that this is not unusual at all in the Church’s tradition; in fact, we have a venerable history of battling heavyweights.  Let me just cite a few examples. 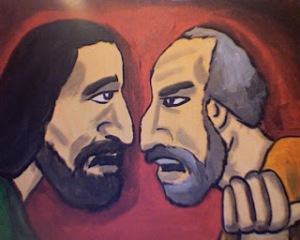 Let’s start with two guys named Paul and Cephas (the fisherman who later got the new name of Peter).  While they made up  later, St. Paul doesn’t sugarcoat his own public and heated disagreement with Peter over the issue of the evangelization of non-Jewish converts to Christianity.  Consider just Galatians 2: 11-13

But when Cephas came to Antioch, I opposed him to his face, because he stood self-condemned;  for until certain people came from James, he used to eat with the Gentiles. But after they came, he drew back and kept himself separate for fear of the circumcision faction. And the other Jews joined him in this hypocrisy, so that even Barnabas was led astray by their hypocrisy.

In the verses prior to these, Paul made several references about the “acknowledged leaders” of the Jerusalem church — including Peter, James and John — and at one point adds, “what they actually were makes no difference to me; God shows no partiality”.

Here’s another example, drawn from the early days of the Second Vatican Council.  There has always been tension for centuries between the world’s diocesan bishops and the Roman Curia.  This was certainly in evidence during the antepreparatory and preparatory phases leading up to the Council, as preliminary draft documents were crafted and prepared for eventual debate during the Council.  But perhaps nowhere was this tension for evident than in the dramatic confrontation on November 8, 1963, when Cardinal Josef Frings of Cologne confronted Cardinal Ottaviani over the conduct of the Holy Office (now the Congregation for the Doctrine of the Faith), of which Ottaviani was Prefect. Cardinal Frings [whose theological advisor was a young theologian named Joseph Ratzinger] criticized the Holy Office, “whose methods and behavior do not conform to the modern era and are a source of scandal to the world.”  Archbishop Thomas Connolly of Seattle wrote to his archdiocesan newspaper that: 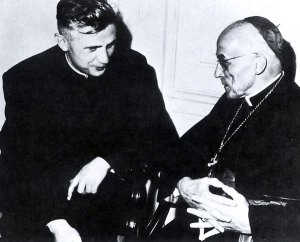 It all started more or less on Friday when Joseph Cardinal Frings, the Archbishop of Cologne, took the floor and flayed the Congregation of the Holy Office, declaring its procedures unjust, unfair, and completely out of harmony with modern times. He called for a complete revision of its status and its rights and privileges, saying that it was grossly unfair for the Holy Office to accuse, condemn, and judge any individual without having the opportunity of defending himself at a hearing. He declared further that the number of bishops in the curia should be reduced and many of the posts taken over by laymen. He minced no words in his denunciation.

He was immediately challenged by Alfredo Cardinal Ottaviani, secretary [now, Prefect] of the Holy Office. To use the parlance of the prize ring, the Cardinal had been taking it on the chin so often during the past few weeks that he had reached the limit of his patience. He picked himself up off the canvas; he lashed out at all his critics, swinging freely right and left. In a voice shaking with emotion and pent-up anger, he declared that criticisms of the Holy Office were criticisms of the Pope himself, that the German Cardinal’s words were spoken out of ignorance, if not worse. . . . It was the hottest exchange yet but of course, such things are to be expected for this council is not a sodality meeting.

And then there was the running public debate concerning the relationship of the universal Church to the diocesan Churches between then-Cardinal Joseph Ratzinger and Cardinal Walter Kasper.  The pair exchanged a series of articles which raised point and counterpoint on this critical issue.  Far from simply an academic exchange between theologians, the debate raised issues of episcopal authority between bishop and the Roman curia.  Kasper, basing his arguments on his experiences as diocesan bishop, continued the “Frings critique” of curial procedure.

Here’s my point, and it’s the same one made by Pope St. John XXIII during his opening address to the Second Vatican Council.  Following his criticism of the “prophets of gloom”, he concluded that “Everything, even human differences, leads to the greater good of the Church.”  Those who find the Rodriguez Maradiaga-Mueller exchange problematic should probably calm down and appreciate the fact that our church has a venerable history of public disagreements that will ultimately lead to positive results.

We seek unity in faith, not uniformity.