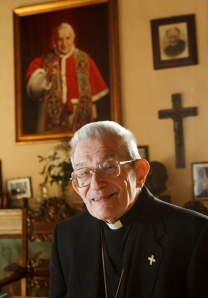 Pope Francis has now announced his selections to be named Cardinals at the next Consistory on 22 February 2014.  There were no real surprises in the list, but there was an unusual tribute paid to Pope John XXIII, who will be canonized in company with Pope John Paul II next April.  On the list of new cardinals was the name of Loris Francesco Capovilla, formerly a priest of the Archdiocese of Venice and long-time secretary to Cardinal Roncalli during his service as the Patriarch of Venice and then during his tenure as Pope John XXIII.

Loris was ordained a priest for the Archdiocese of Venice in 1940.  When newly-appointed Cardinal Angelo Roncalli arrived in Venice in 1953 to take over as Patriarch, he tapped Fr. Capovilla to be his priest-secretary.  He accompanied the Cardinal to Rome on many occasions, including Roncalli’s trip to Rome for Conclave following the death of Pope Pius XII in 1958.  Following his boss’s election to the papacy, Fr. Loris remained at his side until Pope John’s death on the feast of Pentecost, 1963.

Father Capovilla was ordained a bishop in 1967 and retired in 1988.  He now resides in a community named after the birthplace of his old friend.  Over the years, he has been an invaluable resource for scholars studying the ministry of Papa Giovanni, and his selection to be a Cardinal is simply one more sign of Pope Francis’ own devotion to Pope John.  The pope, of course, already waived the necessity of a second miracle to be attributed to Pope John, and coupled his canonization with that Pope John Paul II.

Capovilla walking in the Vatican Gardens with Pope John

Amidst all of the armchair analysis of the other cadinalatial selections and their possible impact on the Church, this particular selection is a simple, lovely gesture of humility and respect.

One comment on “A Simple, Lovely Gesture: Cardinal Loris Capovilla”