O Key of David and scepter of the House of Israel;
you open and no one can shut;
you shut and no one can open:
Come and lead the prisoners from the prison cell,
those who dwell in darkness and the shadow of death.

Today the Church, again using the language of the prophet Isaiah, refers to the Messiah as the Key of David. Consider the following passages:

keys” to Peter.  While, of course, the Key can “shut, and no one can open,” the hope of the Antiphon is on the opening of dungeons and the liberation of people from bondage.  With Christ comes freedom.

In Evangelii Gaudium, Pope Francis often uses the language of freedom and openness to all in their need.  Consider, at #63:

We must recognize that if part of our baptized people lack a sense of belonging to the Church, this is also due to certain structures and the occasionally unwelcoming atmosphere of some of our parishes and communities, or to a bureaucratic way of dealing with problems, be they simple or complex, in the lives of our people.  In many places an administrative approach prevails over a pastoral approach, as does a concentration on administering the sacraments apart from other forms of evangelization. 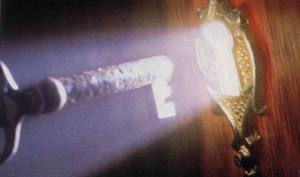 While the pope clearly criticizes certain cultural and societal shortcomings which devalue the human person and keep them “locked up” in various ways, he continues to level criticism as appropriate on the structures of the Church itself and the attitudes of some of its people.  For example, at #70:

It is also true that at times greater emphasis is placed on the outward expressions and traditions of some groups, or an alleged private revelations which would replace all else, than on the impulse of Christian piety.There is a kind of Christianity made up of devotions reflecting an individual and sentimental faith life which does not in fact correspond to authentic “popular piety”.  Some people promote these expressions while not being in the least concerned with the advancement of society or the formation of the laity, and in certain cases they do so in order to obtain economic benefits or some power over others. . . . It is undeniable that many people feel disillusioned and no longer identify with the Catholic tradition.  Growing numbers of parents do not bring their children for baptism or teach them how to pray.  There is also a certain exodus towards other faith communities.  The causes of this breakdown include: a lack of opportunity for dialogue in families, the influence of the communications media, a relativistic subjectivism, unbridled consumerism which feeds the market, lack of pastoral care among the poor, the failure of our institutions to be welcoming, and our difficulty in restoring a mystical adherence to the faith in a pluralistic religious landscape.

This is quite a review!  So how does the “Key of David” open us up to address this general breakdown?  We believe that Christ, fulfilling those prophecies of Isaiah, IS the light to the nations, and he IS able to open the eyes of the blind, and to set those imprisoned free.  Since this is a blog dedicated to all things diaconal, we can ask specifically of all who are ordained to this service: How are we to “use” the Key of David in our ministries?  How might we address that rather bleak checklist of “prison cells” enumerated by the pope?  Each one of those items is, in fact, hampering the freedom of all, and we are called to help break down those barriers.  How can we improve family communication, use the power of the media in positive ways, preach the objective truth that God loves God’s creation and wants all to live in freedom, the use of resources for the common good of all, reach out with new energy to the poor and the marginalized, be a more welcoming parish community, and assist in developing a healthy Christian spirituality?  Christ is the Key, and he has called us all to participate in the use of that Key in the world today.

Take a look around the parish.  What structures, policies and practices can and must be reformed so that the Key (Christ) can be more effectively used?  Are there things keeping people “in their place” rather than setting them free? Now look beyond the parish?  What needs in the community are not being met at all?  How can we move outside parish and even Church boundaries to carry the Key to all of those imprisoned?

One comment on ““O Clavis David”: Set Your People Free”