7 December 1941.  Seventy-two years since that particular “Day of Infamy.”  World War II had, of course, begun years earlier.  By the time it ended, at least 70 million people were dead.  Pope John Paul II, in his 2004 Message for the World Day of Peace, referred to the Second World War as “an abyss of violence, destruction and death unlike anything previously known.”  How does a world recover from such madness?  For those of us who were born following the War, we have lived with its effects our whole lives, even though specific memories of the War continue to fade with the passing of the World War II generation.

For Catholics, I believe it is important to understand the Second Vatican Council as the Catholic Church’s response to World War II: the conditions that led to the War and the world that emerged after it.  Pope John XXIII announced his plans for the Council only fourteen years following the end of War.  Opening the Council, he observed: 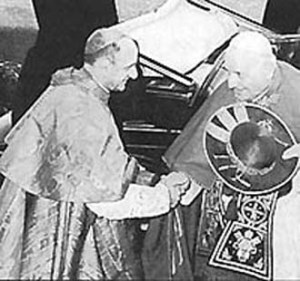 We feel we must disagree with those prophets of gloom, who are always forecasting disaster, as though the end of the world were at hand.  In the present order of things, Divine Providence is leading us to a new order of human relations which, by men’s own efforts and even beyond their very expectations, are directed toward the fulfillment of God’s superior and inscrutable designs. And everything, even human differences, leads to the greater good of the Church.

How do we cooperate with Divine Providence in attaining this “new order of human relations”?  The bishops of the Council were not seeking simple superficial updating of the Church; they were setting out to create a new understanding of the Church in a world already gone mad and in need of the “soul and leaven” a renewed Church might provide.  Pope Paul VI, in his famous speech at the General Assembly of the United Stations in October 1965, famously proclaimed:

Paul VI at the United Nations

And now We come to the high point of Our message: Negatively, first: the words which you expect from Us and which We cannot pronounce without full awareness of their gravity and solemnity: Never one against the other, never, never again.  Was it not principally for this purpose that the United Nations came into being: against war and for peace?  Listen to the clear words of a great man, the late John Kennedy [himself a veteran of World War II], who declared four years ago: “Mankind must put an end to war, or war will put an end to mankind.”  Long discourses are not necessary to proclaim the supreme goal of your institution.  It is enough to remember that the blood of millions of men, numberless and unprecedented sufferings, useless slaughter and frightful ruin are the sanction of the covenant which unites you, in a solemn pledge which must change the future history of the world No more war, war never again.  It is peace, peace which must guide the destinies of peoples and of all mankind.

What is particularly telling is the fact that when Pope Paul returned to Rome from this trip, he went immediately to the St. Peter’s and shared his insights with the assembled Council Fathers who, in their own turn, adopted the pope’s message as their own.  They were in the midst of their own work on their capstone document, Gaudium et spes, “The Pastoral Constitution on the Church in the Modern World.  In particular, they began working on the section dealing with war and peace, incorporating the insights of Pope John XXIII’s Pacem in Terris and Pope Paul’s speech to the UN.

As we remember the personal, national and global tragedies of the Second World War, may we this Advent renew our commitment and preparation for the new order of human relations foreseen by Pope John.  May we, like Mary pregnant with the Christ, work to bring Christ and his Gospel to the world in the real, concrete terms envisioned by the Council and now renewed for us again by the words and deeds of Pope Francis.

2 comments on “An Advent Remembrance: War and Peace”