Ever since the Pope announced his first-ever visit to the United States, preparations began.  Then, as his plans expanded from Philadelphia to New York to Washington, DC, matters became even more hectic.  Then, the surprise announcement of his intention to canonize Franciscan Junipero Serra during his time in Washington, and the jump was made into hyperspace.  Today, in Washington, all of those preparations could be seen coming together. 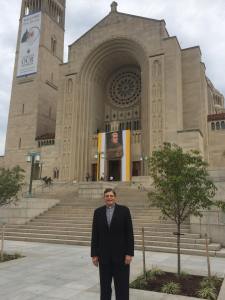 It was a cloudy, cool day by Washington standards, and later in the afternoon, the clouds opened and, as one hotel worker remarked, it felt like Winter had arrived, not the Fall!  I am here for several reasons.  I am a deacon ordained and incardinated into the Archdiocese of Washington, DC, so this is my home archdiocese in ecclesial terms, and it is good to be back here on that level alone.  In fact, as a DC Deacon, I have served here on the Archdiocesan staff as well as on the senior staff of the United States Conference of Catholic Bishops (USCCB).  So, when we took the Red Line to the Brookland/CUA Metro stop this morning, the closest stop for the Catholic University, and right across the street from the USCCB, I felt immediately back at home.

But the other reason I’m here is to accompany and assist the Bishop of Monterey in California, Richard J. Garcia, on whose staff I serve currently.  Soon-to-be Saint Junipero Serra founded many missions in California, and seven of them are located within the Diocese of Monterey, with Serra himself buried in the sanctuary of his favorite mission at Carmel.  The bishop was asked to come to Washington a bit early to meet with numerous press outlets to speak of the canonization and its meaning for Catholics today.  He asked me and a couple of our priests to assist with the interviews so much of the day was spent responding to those press requests.

It was wonderful to watch the preparations on the campus of the Catholic University.  I did my doctoral work here, and watching the students going about their normal business while others were setting up chairs, workers putting the final touches on the altar and sanctuary on the East side of the Basilica, and technicians conducting never-ending sound checks: it was all very exciting.  Eventually we headed back to our hotels to get ready for tomorrow.  Our pilgrimage group has made it safely, and we’ll meet with them for breakfast tomorrow before they head out on their DC adventures.  Other clergy and laity are also heading in, many of whom will be helping with the Papal Mass on Wednesday. 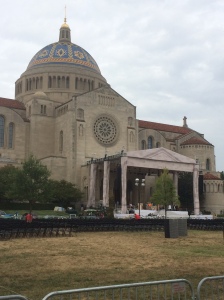 As I’ve written before, it will be important to keep in mind all of the “moving parts” of the Pope’s visit, which has already begun — in Cuba.  That part of the trip is closely linked, intentionally I am sure, to the pastoral visit to the United States.  The Pope will pray with the bishops of the United States on Wednesday morning at St. Matthew’s Cathedral in Washington, have lunch with them at the St. John Paul II Cultural Center near the Catholic University, and then the Mass later in the afternoon.  Then the next day, Thursday, the Pope will address a joint session of Congress, the first time a pope has ever done that.  While Californians are focused on the canonization of Father Serra, I think most Washingtonians, and perhaps most Americans, are more interested in the Congressional address, which promises to be an exciting challenge to every part of the American political spectrum.

And then, of course, the Pope leaves for New York and Philadelphia.  I hope simply to reflect and report on my impressions of the DC portion of the apostolic journey.

For now, please keep Pope Francis in your prayers, that he travels in safety and good health, and that his mission of spreading the Good News is met with joy and enthusiasm!