It was a busy day today, and these scattered thoughts reflect some of the craziness that’s building around here.

It was still another gorgeous Roman day.  As I entered the Piazza San Pietro, it was obvious that the crowds are building in both numbers and intensity.  There were long lines yesterday to get into the Basilica, but nothing like today!  The queue wrapped around the piazza and into the Via della Conciliazione.  The crowds today were often celebrating in parish, organization, or even national groups.  One sizable group had brought in a large wooden cross, secured it in a stand, and serenaded passersby with a variety of songs and hymns for at least an hour.  Other groups were singing around the Square as well.  I would estimate — very unofficially — that the crowd in the Square today was at least triple what was there yesterday — and tonight, a deacon friend from Rome told me that they are now estimating as many as five million people to be “attending” the canonization ceremonies at venues all over town.  One group today was practicing their “John Paul II, we love you” chant, although I didn’t hear a similar chant for Pope John.  The press scaffolding next to the Vatican Communications Office seemed quite crowded today, much more so than yesterday. 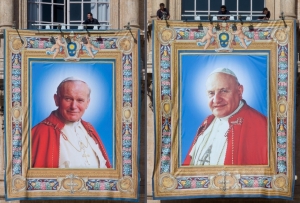 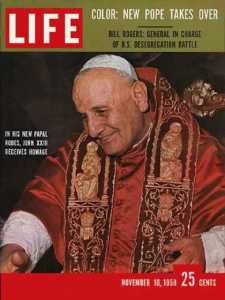 Before going on, I’d like to add a bit about Pope John.  Personally, I am sorry that so many people have forgotten just how popular, inspiring and influential  Pope John was in his day.  When he died on Pentecost, 1963, a proposal to proclaim him a saint immediately, “Santo Subito”, was chanted by the people and circulated among the world’s bishops who were preparing to return to Rome for the second session of the Council.  It was proposed that the Council itself, when back in session, make the proclamation of sainthood (under the leadership of Pope John’s good friend and successor, Pope Paul VI).  Although Pope John was extraordinarily popular and beloved for his simplicity, humor and pastoral concern, the bishops decided that to proclaim him a saint immediately would be unseemly; there also seemed to be a sense that it would be better to wait until “Pope John’s Council” was successfully concluded as his legacy before proceeding further.  Obviously, these are two very different men, and this is not a popularity contest!  Still, I hope that younger people who have really only known St. John Paul II and his recent successors might be inspired by this canonization to study and learn about St. John XXIII and Pope Paul VI.  To understand where we are today on many levels in the Church, a person really needs to understand those two popes of the Council and the first years of its implementation.

As I wandered around the Square talking with people, and later in conversations with friends, there was a general enthusiasm about the leadership of Pope Francis, his genius at linking these two new pope-saints, and his own unique stamp on exercising the Petrine ministry.  The only concern raised was that he has made himself so open and vulnerable that he may be attacked!  The numbers at his Wednesday audiences are stunning, and he has begun the audiences much earlier, arriving in his popemobile sometimes as early as 9:30 AM so he has more time to meander through the crowds before taking his position on the platform for the formal portion of the audience.

Finally, a brief word about the instructions we’ve received for Sunday.  I must leave the monastery in which I’m staying at 3:30 AM for the trip to St. John Lateran.  I have included a picture of St. John Lateran in bright sunshine which I took yesterday; that’s not a view I’ll have at 5:00 AM on Sunday morning!

At some time between 4:30 and 5:00 AM, a special bus will take us priests and deacons who are distributing communion from the Lateran to the church of Santa Maria in Traspontina at the other end of the Via della Conciliazione from St. Peter’s (a week ago, we were told the bus would leave at 5:30; that’s been changed.  Maybe by Sunday, it will change even further.  I intend to be there in plenty of time!).  At Santa Maria we will vest in alb and white stole and wait for the Mass of Canonization to begin at 10:00 AM, when we will make our way out the front doors of the church into the Via della Conciliazione.  Eventually, we will distribute Communion to those communicants in the area.  We have been told to distribute communion only on the tongue (actually, the instructions say “data in bocca” (given into the mouth), in order to prevent someone from taking the Host in the crowd and giving it to another.

I’m going to St. Peter’s tomorrow morning; it will be interesting to see what happens next as the numbers build along with the excitement!

Santa Maria in Traspontina on the Via della Conciliazione

5 comments on “The Canonization Chronicles: Notes from Friday, 25 April”