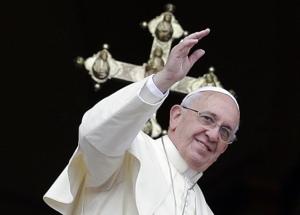 It’s hard to believe, but Lent is just around the corner.  Every year, popes write messages to the world offering a vision for ongoing conversion and how we might better follow Christ as his disciples.  This year, Pope Francis once again demonstrates his profound diaconal vision for the Church.  His 2014 Lenten Message focuses our attention on the nature of poverty itself and our response to it

In the year that has passed since the pope’s election, I have been struck by the profound sense of diaconate which radiates from the Holy Father, especially, during Lent and Holy Week.  Let me start by something which some might think only an arcane bit of trivia, but for me, it is something quite profound.  Some of the first images we had of the new pope came from his days as Archbishop of Buenos Aires as we washed the feet of people — all kinds of people —  on Holy Thursday.  Invariably the images showed the Cardinal Archbishop wearing his stole as a deacon does while washing feet.  This was clearly a deliberate choice he made: to remove his priest’s chasuble and to rearrange his stole diagonally as a deacon wears it.  For people who might not be very familiar with the way these things normally work, this may not seem like such a big deal, so let me explain.  Normally, during the Mass of the Lord’s Supper on Holy Thursday, in the Latin Church,  the priest (or bishop) presiding, the deacons assisting at that Mass, and any concelebrants, will remove their outer vestments: the chasuble for the bishops/presbyters, the dalmatic for the deacons. 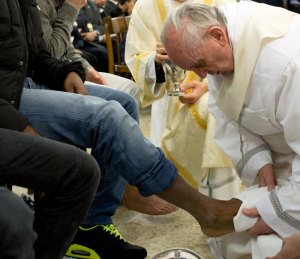 In many cases, these same clerics might also take off their stoles as well, although some will keep the stoles on.  Priests and bishops wear their stoles over their shoulder with the ends of the stole hanging straight down in front of them.  Deacons wear the stole over the left shoulder, and secured at the right hip, so that the stole appears diagonally across the deacon’s chest.  So, imagine a priest celebrating this rite: he removes his chasuble and the stole — worn in the priestly manner — is visible.  If he leaves the stole on during the washing of the feet, then that’s what people will see.  If the deacon removes his dalmatic, people will see the stole worn diagonally.  What Pope Francis does is something I don’t think any of us has ever seen before: he removes his chasuble, and then takes his priest’s stole and rearranges it, intentionally, into the diagonal stole of the deacon.  And only then does he begin to wash feet.

The message, therefore,  is crystal clear and sacramentally significant: In this act of washing feet, we are imitating Christ the Servant, Christ the Deacon, who was pouring out his life for others just as he was pouring out the water over the feet of his disciples.  It’s all about diakonia.

Want more?  Guess when Pope Francis actually signed his Lenten Message?  Oh, it was only released over the last couple of days, but if you look at the end of the document, you will find that he actually signed it on 26 December, the Feast of St. Stephen, Deacon and First Martyr.

With this as background, let’s look at some of the things the Holy Father has to say.  The pope cites St. Paul: “He became poor, so that by his poverty you might become rich”(2 Cor 8-9), and asks, “What do these words of Saint Paul mean for us Christians today?  What does this invitation to poverty, a life of evangelical poverty, mean for us today?”  He immediately responds that first this “shows us how God works.”  He speaks of how God chose to reveal himself in poverty out of a desire to be close to us, “a love which does not hesitate to offer itself in sacrifice for the beloved.”  I was reminded of the words of St. John Paul II, who wrote in his great encyclical Fides et Ratio, when he referred to kenosis as “a grand and mysterious truth for the human mind, which finds it inconceivable that suffering and death can express a love which gives itself and seeks nothing in return” (#93).

Pope Francis reminds us that this was a “logic of love,” and that God did not desire salvation to “drop down from heaven”; rather, Christ was among us “to comfort us, to save us, to free us.”  He continues, “In imitation of our Master, we Christians are called to confront the poverty of our brothers and sisters, to touch it, to make it our own and to take practical steps to alleviate it.  Destitution is not the same as poverty: destitution is poverty without faith, without support, without hope.”  The pope lists three types of destitution: material, moral and spiritual; as we go through them, how can each of us — especially those of us who are clergy of the Church — address each of these? 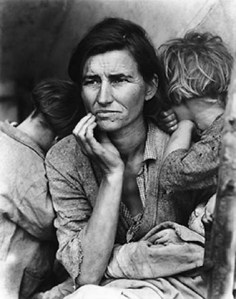 Material destitution refers to those living without the essentials of human dignity, “those living without who lack basic rights and needs such as food, water, hygiene, work and the opportunity to develop and grow culturally.”  The pope observes that “the Church offers her help, her diakonia, in meeting these needs and binding these wounds. . . .”  He powerfully reminds us that in the poor and the outcast “we see Christ’s face; by loving and helping the poor, we love and serve Christ.”  He goes even further, striking a now familiar theme: “When power, luxury and money become idols, they take priority over the need for a fair distribution of wealth.  Our consciences thus need to be converted to justice, equality, simplicity and sharing.”

Moral destitution is “slavery to vice and sin.”  The pope speaks of those who have lost all hope of finding meaning in life, suffer from addictions of all types (he cites alcohol, drugs, gambling and pornography), or suffer from lack of “equal access to education and health care.”  Moral destitution is all about a loss of hope and meaning, often due to unjust social conditions, by unemployment and a loss of dignity.

Spiritual destitution is experienced when people turn away from God and reject his love. “If we think we don’t need God who reaches out to us through CHrist, because we believe we can make do on our own, we are headed for a fall.”  The pope reminds us that it is the Gospel which is the “real antidote to spiritual destitution:

Wherever we go, we are called as Christians to proclaim the liberating news that forgiveness for sins committed is possible, that God is greater than our sinfulness, that he freely loves us at all times and that we were made for communion and eternal life.  The Lord asks us to be joyous heralds of this message of mercy and hope!

We many not yet be thinking about Lent, but the Pope is.  And would it really hurt any of us to start our spiritual preparations now?  He prays that all of us be “ready to bear witness to all those who live in material, moral and spiritual destitution the Gospel message. . . .  Lent is a fitting time for self-denial; we would do well to ask ourselves what we can give up in order to help and enrich others by our own poverty.  Let us not forget that real poverty hurts: no self-denial is real without this dimension of penance.  I distrust a charity that costs nothing and does not hurt.”

So, my friends, are we living and serving in the image of Christ?  Are we are truly imitating Christ, “who became poor and enriched us by his poverty”?  Have we emptied ourselves so that others may live?

St. Stephen, Deacon and First Martyr, Pray for Us! 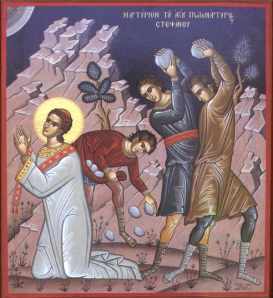 One comment on “More From Deacon — I mean, Pope — Francis which will upset people”