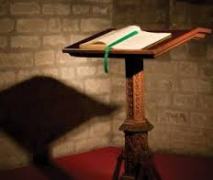 Since 1995 I have been blessed to serve as retreat director for gatherings of deacons and their wives, deacon candidates and their wives, priests and even bishops.  These have ranged from annual retreats, canonical retreats prior to ordination, anniversary retreats and so on.  It has always been such a wonderful experience: the sessions themselves, the quiet conversations, meal times, the socials, and most especially, the time for prayer. 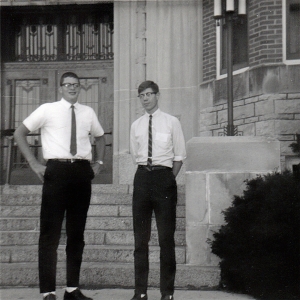 There have been unusual moments, too!  Like the time I discovered that one of the men who would be on retreat was an old high school seminary classmate whom I hadn’t seen since 1967 when we graduated!  It was hard not to look out at him and think, “What a road we have all been on, and we could never have imagined that we would be together again all these years later as deacons.”  Since that experience a few years ago, several more similar encounters with former seminary classmates have taken place: always a humbling experience!

In a similar experience, I remember the first public academic lecture I was asked to give at the Catholic University of America after I received my Ph.D. there.  The topic of the lecture concerned ecclesiology and catechesis, and the audience was full of my former professors, mentors and advisors: now they were there to hear what I had to say as a colleague.  As a retired Navy officer who frequently briefed senior military and government officials and did all sorts of other challenging things at sea and ashore, I don’t think any of those experiences were any more frightening that preparing for that lecture and looking out at those particular people who had taught and inspired me so much. 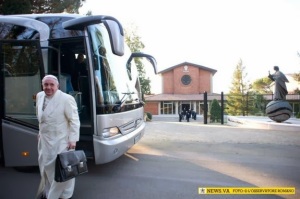 It was with those thoughts in mind that I came across the following images of Pope Francis arriving for the Lenten Retreat for the senior curia this year.  Smiling broadly as he steps off the bus from Rome, the pope seems happy to be away from the city, and one can only wonder what books he has brought with him in his briefcase!

The retreat director is a parish priest from Rome, Msgr. Angelo De Donatis.  Imagine looking out at the community of retreatants and seeing the humble figure in white listening to your every word!

The pope definitely came to be on retreat.  It is significant to see that he is wearing the papal cassock without the pellegrina, the short cape usually worn over the cassock.  It was widely reported after Pope-emeritus Benedict went into retirement that he would no longer wear the pellegrina; it is a sign of the jurisdictional autho 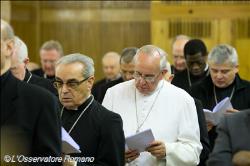 rity of the bishop, and the pope-emeritus wanted it to be clear to everyone that he no longer exercises papal jurisdiction.  In this case, it seems safe to say that Pope Francis has come with an attitude of leaving the burdens of the papal office behind him for a few days so that he can re-charge his spiritual batteries while on retreat (Now before anyone takes offense by my comments: no one, and certainly not me, is suggesting that he is no longer exercising papal jurisdictional authority while he’s on retreat!  Of course he is the pope and continues to be while he’s on retreat!  I’m simply suggesting a kind of spiritual attitude that focuses at this time more on spiritual renewal than on papal authority.) 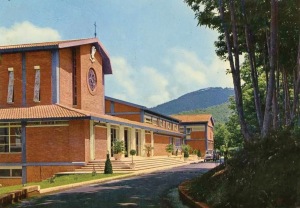 The Pope has also arranged this retreat away from the Vatican, in order to help the retreatants leave their own familiar environs behind.  He and the curia will be on retreat from March 9-14 at the Pauline Fathers’ retreat and conference center in Ariccia, a small medieval town not far from the papal summer residence of Castel Gandolfo.

May we also find creative ways of retreating during Lent.  Most of us may not be able to go off to a nice retreat location, but how might be walk a similar path nonetheless?  Perhaps we can find ways to rearrange our work schedules a bit; maybe we take a lunch break and make a quiet visit to the Blessed Sacrament at a nearby church.  Perhaps instead of going for that extra cup of coffee, we take that time and say a quiet decade of the rosary.  Certainly our parishes offer opportunities as well: go to Confession, make the Stations of the Cross, sit quietly in prayer, take advantage of Lenten speakers or days of recollection.  The benefits of finding a way to “retreat” are incalculable.  The Pope himself said a few days ago that persons who can be on retreat “experience the attraction and fascination of God and return renewed and transfigured in their daily lives, their ministry and their relationships.”  Even if we can’t go on a five-day directed retreat in a beautiful medieval town by a lake, perhaps we can break up our normal routine enough to open ourselves to this transfiguration during Lent.

And, forget the elderly man in white sitting next to you! 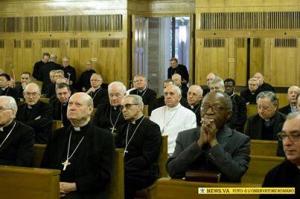