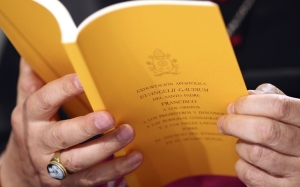 So far, much of the coverage of Evangelii gaudium (EG), Pope Francis’ Post-Synodal Apostolic Exhortation, has focused on snippets of random phrases on the one hand, commentary on the pope’s remarks on economic life, or even assessments of the magisterial “weight” to be attached to the text (If someone likes what the pope has to say, they want it to be as “weighty” as possible; if someone else doesn’t like what is being written, they want it to be as insignificant as possible).  What I want to try to do is to find middle, common ground.  I also don’t want to engage in “proof-texting” the document, or in getting so engaged in analyzing the trees that we miss the forest of the pope’s message.

EG consists of 288 sections (“paragraphs”), arranged in an Introduction and five chapters.  Let’s start with the Introduction (paragraphs 1-18).  It may be helpful to begin with the end of the Introduction, actually!  Paragraphs 16-18 are self-described as providing the “scope and limits of this Exhortation” so this should be helpful in offering the proper framework for the rest of the document.

Pope Francis grounds the Exhortation, not surprisingly, with the XIII Ordinary General Assembly of the Synod of Bishops held between 7-28 October 2012, which focused on the “New Evangelization”:  “I was happy to take up the request of the Fathers of the Synod to write this Exhortation.  In so doing, I am reaping the rich fruits of the Synod’s labors” (#16)  However, he immediately expands on that scope:   “In addition, I have sought advice from a number of people and I intend to express my own concerns about this particular chapter of the Church’s work of evangelization.”  So far, so good.  But then the pope does something significant and challenging.  He tells us what he is NOT going to do, and issues a strong “exhortation” to the bishops of the world.

Countless issues involving evangelization today might be discussed here, but I have chosen not to explore these many questions which call for further reflection and study.  Nor do I believe that the papal magisterium should be expected to offer a definitive or complete word on every question which affects the Church and the world.  It is not advisable for the Pope to take the place of local Bishops in the discernment of every issue which arises in their territory.  In this sense, I am conscious of the need to promote a sound decentralization.

Paragraph 16, therefore, seems particularly important for our understanding of what will follow, both in the Exhortation and in the pope’s approach to the mission of the Church (evangelization) and his own exercise of the See of Peter.  We are seeing continuity and change walking hand in hand.  In this document, Francis remains grounded in the work of the Synod, but, while he intends to add his own voice to that of the Synod, he clearly and directly challenges the bishops of the Church saying to all, in effect, that no one should look to the pope for answers on everything.  His expectation is for bishops to BE bishops, pastors, leaders in their own right for their diocesan churches.  This is not necessarily a new idea, of course.  Vatican II clearly teaches the same thing repeatedly!  However, I find it helpful that Francis emphasizes a repeated mention of “sound decentralization” as we shall see later.

Turning briefly to the opening of the document itself, we should comment on the pope’s choice to focus on “joy” as the theme of the Exhortation.  Joy, of course, has a profound and venerable theological significance for Christians, leading Teilhard de Chardin to observe that “Joy is the infallible sign of God’s presence.”  There are numerous “Francis” touches related to this theme.  While fully acknowledging the sufferings of so many persons today, he observes that “there are Christians whose lives seem like Lent without Easter” (#6), and that “sometimes we are tempted to find excuses and complain, acting as if we could only be happy if a thousand conditions were met” (#7).  And yet, with a masterful use of scripture and calling upon other sources such as Paul VI (especially Evangelii nuntiandi) and even the Aparecida document of the bishops of Latin America, Francis calls all of us to recall the fundamental joy that should permeate the hearts and lives of all.

Paragraph #15 cites Pope John Paul II’s Redemptoris missio of 1990, in which the late pope wrote, “today missionary activity still represents the greats challenge for the Church” and “the missionary task must remain foremost.”  Pope Francis asks, “What would happen if we were to take these words seriously?”  He immediately answers his own question: “We would realize that missionary outreach is paradigmatic for all the Church’s activity” [emphasis in the original].  It is here that he turns to the 2007 Aparacida Document — as he has frequently in his homilies since becoming pope — writing that “we cannot passively and calmly wait in our church buildings,” moving rather into a “decidedly missionary pastoral ministry.”  As every pope has said since at least Pope John XXIII, spreading the Gospel is THE mission of all members of the Church, and every activity in which we are involved should be understood as an evangelistic.  It is clear from the Introduction to EG that Pope Francis intends to focus his person and his papacy on this renewed, incarnated vision of a Servant Church who lovingly and joyfully proclaims God’s presence to all.

3 comments on “The Exhortation: Getting Started”